Earlier this month, we celebrated several members of Habinteg’s Insight Group amazing achievement of joining the Disability Power 100 list – an annual publication containing the 100 most influential disabled people in the UK. Andrew Gibson, Sam Renke and Kerry Thompson, who are all wheelchair users, have played an important part in influencing the accessible homes agenda on a national scale and their efforts have helped raise greater awareness of the accessible housing crisis.

Sam, Andrew and Kerry have also been instrumental during Habinteg’s award-winning #ForAccessibleHomes campaigns. #ForAccessibleHomes aims to raise the awareness of the national shortage of accessible, inclusive properties to rent or to buy by campaigning for the Government, councils and developers to recognise the importance of building homes that are accessible, easy and cost-effective to adapt to meet life’s changing needs. 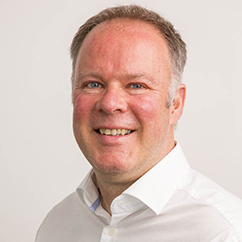 Andrew was the Vice Chair of Habinteg’s board for 8 years until 2019. He has used his personal experience to tell a compelling story and share with people who may not be experts in access, what the optional access standards in the revised building regulations (2015) truly mean to a disabled person. During his time on the board, Andrew was instrumental in delivering Habinteg’s mission to champion inclusion by providing and promoting accessible homes and neighbourhoods that welcome and include everyone.

Andrew has continuously been at the forefront of Habinteg’s #ForAccessibleHomes campaign, representing the organisation for two years in a row at parliament. His efforts have helped the campaign win four awards, increasing its visibility further. Other than this, he has met more than 20 MPs and ministers across all parties to help spread the message of why accessible homes are so important and the benefits that they bring to communities. Andrew also provided evidence at two select committees including Women and Equalities select committee in 2017 which led to the then housing minister, Gavin Barwell MP, commit to making sure “accessible housing gets the attention it deserves.” 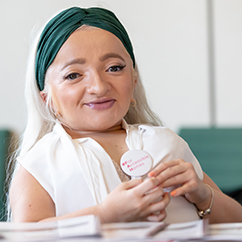 When Sam is not in front of a camera or writing her Metro column, she’s busy campaigning for the rights of disabled people. Her monthly articles in the Metro often shine a light on important issues faced by disabled people, whether that’s lack of access at Pride Festival or obstacles faced at work. Her written work is just one part of the campaigning she has done. She recently visited the former equalities minister Penny Mordaunt MP to express her concerns on the lack of accessible housing in UK – the meeting resulted directly from one of her Metro articles. She has also met other MPs at parliamentary events to put the case for more accessible homes.

Sam has supported Habinteg with its #ForAccessibleHomes campaign for two years. Her continuous support for the campaign has given helped drive its  profile and her many social media followers have expanded the reach of #ForAccessibleHomes. Sam’s Twitter takeover during this year’s campaign week, lead to a lively debate on the platform, demonstrating that accessible housing is vital for a disabled person’s independence. 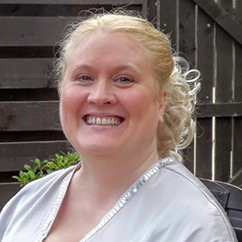 Kerry is one of the Insight Group’s most vocal and active members and is constantly campaigning to improve the lives of disabled people. She is a strong believer in Habinteg’s mission  to increase the provision of accessible housing in the UK and her campaigning work has been published in titles such as HuffPost, BBC News, Daily Mail and The Guardian, raising vital awareness on the issue.

She is also an active spokesperson for the Changing Places campaign that works to support the rights of people with profound and multiple learning disabilities and/or physical disabilities and increase the amount of toilets which they can access. Her work led to Changing Places facilities being installed in 35 Tesco stores across the UK. Kerry was recently awarded a BBC Three Counties’ People’s Choice Award for diversity and equality.

Sam, Kerry and Andrew have been tremendous influencers in the fight for more accessible homes and we can’t thank them enough for the work they’ve accomplished to help the sector and wish them huge congratulations on earning their spot in the top 100. We hope 2020 is an even brighter year for them that delivers impactful changes and solutions to the accessible housing crisis.

Want to join Sam, Kerry and Andrew to help us make a difference? Find out how you can join Habinteg’s Insight Group here: https://www.habinteg.org.uk/group