On Thursday 10th December, Mike Donnelly greeted friends, family and colleagues in the Belvedere room at the Marriott Hotel, County Hall, to celebrate his 22 year career at Habinteg. Mike’s outstanding contribution to housing and disability was introduced by Michael Holyer, former Chair of Habinteg and Paul Gamble, Deputy Chief Executive, two of Mike’s closest working colleagues through the years.

Both paid homage to Mike’s decisive clarity of vision and unswerving sense of purpose, which led to his appointment as Chief Executive in 1992 and in no small way, has made Habinteg what it is today, stable, ambitious and unique in many ways. As Mike himself explained in his farewell speech, it all began with his commitment to difference. Concluding, Mike spoke of his passion for the cause, of the ‘Habinteg family’ that he will leave behind, and the idea that we must continue to learn from difference and diversity as the key to Habinteg’s continued success. 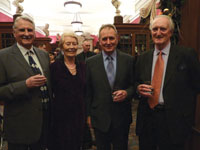