Delores Taylor and Sam Renke, who are both Habinteg tenants, presented their concerns on accessible homes to Equalities Minister Penny Mordaunt MP this week. During the discussion, they focused on Habinteg’s recently launched Insight Report: A Forecast For Accessible Homes which revealed that less than half the local plans in England require a percentage of new homes to be accessible to older and disabled people. The meeting was also attended by North Tyneside MP Mary Glindon and Habinteg’s Director of Strategy and External Affairs Nicholas Bungay.

Delores and Sam touched on their personal experiences with housing before they found a home in a Habinteg development, describing the difficulty of trying to find suitable homes for their needs. They urged Ms Mordaunt to encourage planning authorities to include more accessible homes in their local plans. Currently, less than one fifth of local plans include a requirement for any wheelchair user dwellings.

Habinteg’s Insight report, warned that England is facing an accessible homes crisis. It’s nationwide analysis of 322 local planning policies reveals that less than a quarter of homes built outside London by 2030 will be suitable for older and disabled people with Just 1% set to be suitable for wheelchair users despite 1.2 million wheelchair users in the UK and a rapidly ageing population.

"Everyone should be able to access a home which fits their needs, with the government's planning rulebook making clear that accessible housing must form part of any new development. We are also looking at whether further planning guidance needs to be introduced.

“We need to do more so that everyone involved in building new homes, from those on the planning committee to the architect to the developer, knows what smart design looks like, and the merits of greater accessibility and consequently flexibility in our housing stock.”

“My disability arrived simultaneously with motherhood. I had to adapt myself to living in a way I wasn’t previously used to whilst still trying to raise two daughters. It seemed as though planning authorities didn’t consider disabled people with families as most of the properties I was offered before moving to Habinteg did not suit me. In my previous property, being able to access the garden was almost impossible due to stairs. I realised that having a garden was a priority for me because I wanted to take my children outside without constantly having to leave the house. Also, as I spent a lot of my time indoors, having some green space to go out to was therapeutic for me.”

“It was very useful spending the afternoon with Habinteg and Penny Mordaunt discussing a subject so dear to my heart, accessible homes. With 13.9 million disabled people in the UK we need to address their housing needs & value them in society starting with a stable home.  The fact that there is limited housing can be frustrating. Even though I feel very grateful to have my now fully accessible home that is adapted to my needs, I do feel a little bit trapped as there aren’t many other options if I decide to move.”

“We’re delighted that Delores and Sam were able to join the meeting with the Minister today. Hearing their personal experiences first hand made a huge impact on us all and really demonstrates why the campaign for more accessible homes is so vital. With Delores and Sam’s help and others like them we’re determined to make a difference to the disabled people’s housing opportunities up and down the whole country.”

1. Local plans set policies for new developments, and they are the way that the government expect to see accessible housing introduced. In 2015 the government introduced optional access standards through Building Regulations which local planning authorities should use to set their policies. The optional standards are:

- *M4 (2) Category 2 ‘Accessible, adaptable’, which provides basic access and adaptability similar to the Lifetime Homes Standard, benefiting to all households over the lifetime of the home.

- M4(1) Category 1 is the regulatory baseline. Whilst it offers some basic accessibility features it fails to guarantee the true ‘visitability’ and adaptability that many households will need over their lifetimes

- In order to set requirements for accessible homes planning departments must demonstrate the need in their area and show that overall the plan is viable for delivery.

- Although some developers and local authority building companies may choose to build to accessible standards as a quality indicator, local plans are the way in which standards can be set for all developments and all tenures by the local planning authority.

- When the government announced plans to review accessible housing standards in 2012 a report published by the then Department for Housing, Communities and Local Government estimated that if no changes were made to the national policy by 2024 some 47% of new homes would be delivered to Lifetime Homes standard. Today’s new figures indicate that rather than supporting plans for more accessible homes the regime introduced in 2015 has derailed that trajectory.

3. Methodology: Between January and April 2019 Habinteg assessed all 322 local plans from local planning authorities across England. Researchers identified and analysed data available in published local plans relating to planning policies for accessible homes and used the data to estimate the trajectory for delivery of accessible housing in the eleven years 2019-2030. Best efforts were used to identify the most recent versions of local plans, and in order to deliver analysis that represents a best case scenario, draft plans were included in the analysis where identified 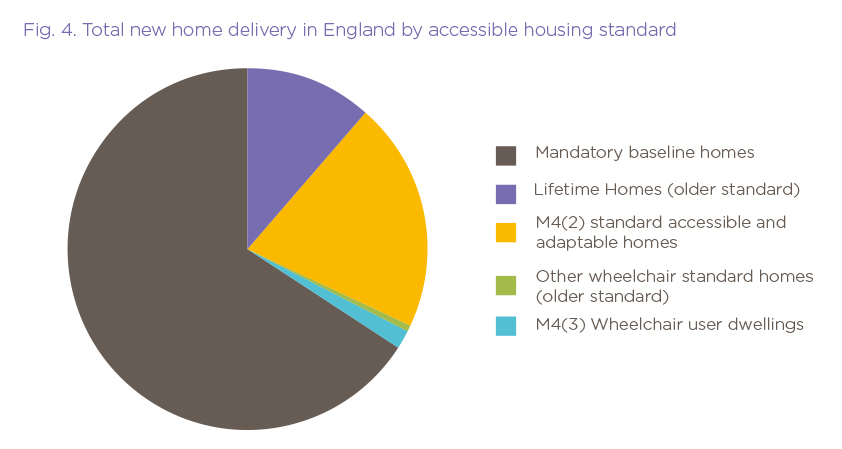